'You Are Finished!': Turkey's Growing War on Christians

Islamic terror attacks that target Christians in Turkey have been noticeably on the rise. During Christmas in 2011, for instance, a large-scale al-Qaeda plot to bomb "all the churches in Ankara" was exposed. Before Christmas 2015, ISIS issued death threats to at least 20 Protestant churches, and warned that "Koranic commandments... urge us to slay the apostate like you."

In 2017, as widely reported, a gunman dressed as Santa Claus entered a nightclub in Istanbul during New Year celebrations, and murdered 39 people. A "heroic soldier of the caliphate," the Islamic State ("ISIS") later claimed, "attacked the most famous nightclub where Christians were celebrating their pagan feast." The statement further characterized the government of Turkey as being the "servant of the cross."

In once-secular Turkey, hate for Christians has, in fact, come to permeate every segment of society — from the average Muslim citizen to the highest levels of government.

The examples are many; two of the most obvious — the slaughter of Christians and attacks on their churches — follow:

In 2009, a group of young Turks — including the son of a mayor — broke into a Bible publishing house in Malatya. They bound its three Christian employees, tortured them for hours, and murdered them. "We didn't do this for ourselves, but for our religion," one of the Turks accused said. "Let this be a lesson to enemies of our religion." Later, they were all released from prison on a technicality.

In 2012, an 85-year-old Armenian woman was stabbed to death in her Istanbul apartment. Lest anyone mistake the motive, her murderer carved a crucifix on her naked corpse. According to the report, that "attack marks the fifth in the past two months against elderly Armenian women (one has lost an eye)."

In 2019, an "86-year-old Greek man was found murdered in his home with his hands and feet tied"; he too had reportedly been tortured.

More common than the targeted killing of Christians are attacks related to churches.

In 2014 in Istanbul, a random gang of Muslims disrupted a baptismal church service in Istanbul. They pushed their way into the church, yelling obscenities; one menacingly waved a knife at those in attendance. "It's not the first, and it won't be the last," a local Christian said.

In 2015, a Muslim man, shouting "Allahu Akbar" ("Allah is greater") and "Revenge will be taken for Al-Aqsa Mosque," hurled a Molotov cocktail at Istanbul's Aya Triada Orthodox Church, and set parts of it on fire. In a separate incident, four Turks shouting "Allahu Akbar" attacked and kicked at the door of Agape Church in the Black Sea region. According to the besieged pastor, they wanted "to go inside and hit someone or attack in some other way."

In 2015, as many as 15 churches received death threats for "denying Allah." "Perverted infidels," one threat read, "the time that we will strike your necks is soon. May Allah receive the glory and the praise." "Threats are not anything new for the Protestant community who live in this country and want to raise their children here," church leaders commented.

When a man opened fire on the Saint Maria Catholic Church in Trabzon in 2018, it was just the latest in several attacks on that church. Weeks earlier, a makeshift bomb was thrown at its garden; in 2016 Muslims crying "Allahu Akbar" vandalized the church with sledgehammers; in 2011 the church was targeted and threatened for its visible cross; and in 2006 its priest, Andrea Santoro, was shot dead during service.

Threatening and defacing churches is especially common. In early 2019, hate-filled graffiti — including "You Are Finished!" — was found on the Armenian Church of the Holy Mother of God in Istanbul. Commenting on it, an Armenian activist tweeted, "Every year, scores of hate attacks are being carried out against churches and synagogues."

In late 2019, while shouting abuses and physical threats against Christians gathered at the Church of St. Paul in Antalya, a man said he "would take great pleasure in destroying the Christians, as he viewed them as a type of parasitism on Turkey."

Most recently, on May 8, 2020, in Istanbul, a man tried to torch a church that had been repeatedly attacked with hate-filled graffiti, among other desecrations. 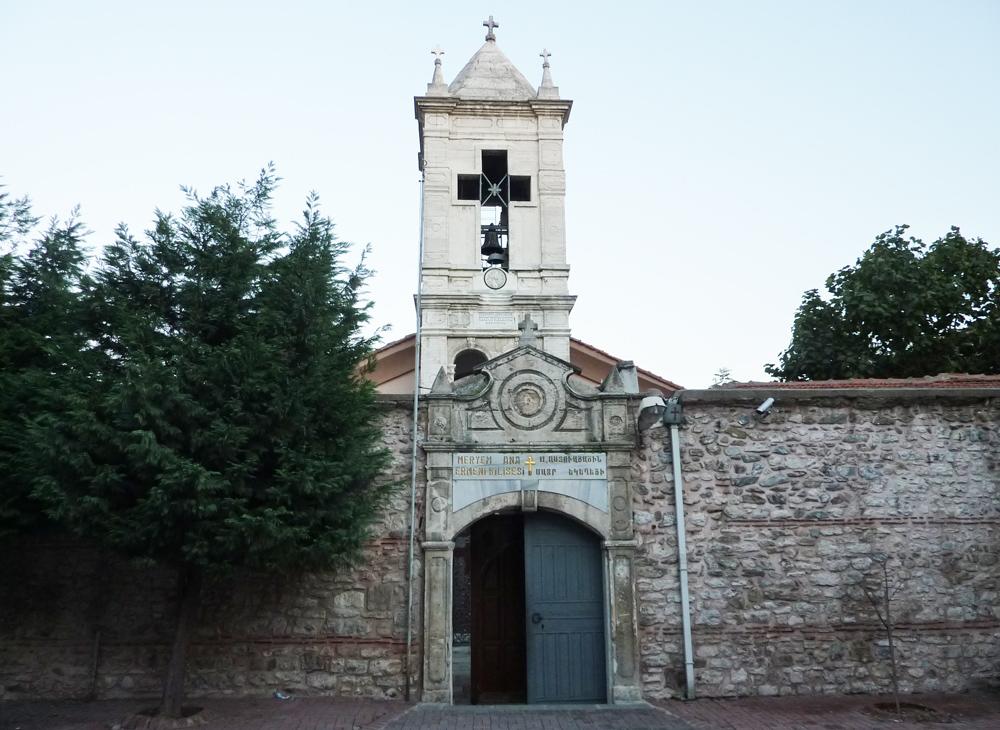 Rather than threaten or attack churches, Turkish authorities have the power simply to confiscate or close them (here, here, and here, for examples). In one instance, police, similarly to the marauders mentioned above, interrupted a baptismal ceremony while raiding and subsequently shutting down an unauthorized church. "Turkey does not have a pathway for legalization of churches," the report noted.

When pretexts cannot be found, assailants sometimes resort to other tactics. In an apparent attempt to conceal the online presence of at least one church, for instance, authorities labeled its website "pornographic," and blocked it. The ban was "horrible," a church representative responded. "It's a shame. It really pains us at having this kind of accusation when we have a high moral standard."

In addition, ancient churches that predate Islam by centuries — including Stoudios monastery, the oldest Christian place of worship in Asia Minor, and founded a millennium before the Islamic conquest in the fourteenth century — are being transformed into mosques. After explaining how the Turkish government built nearly 9,000 mosques in one decade, while banning liturgy in the Sumela Monastery — another historic site inaugurated in 386, about a 1,000 years before Asia Minor became "Turkey" — a report adds, "This arbitrary ban seems to be yet another demonstration of the 'unofficial' second-class status of Christians in Turkey."

Hate for Christians in Turkey has reached the point where "infidels" are pursued even beyond the grave. Attacks on Christian cemeteries are on the rise, prompting one Christian to ask: "Is it now the turn of our deceased?"

According to a March 2020 report, 20 of 72 gravestones in just one Christian cemetery in Ankara were found destroyed. In another recent incident the desecraters broke a cross off a deceased women's grave. A few days earlier, her church burial service had been interrupted by cries of "Allahu Akbar!"

What is behind all these attacks on anything and everything Christian — people, buildings, even graves? The recent response of a journalist in Turkey was an "environment of hate":

"But this hateful environment did not emerge out of nowhere. The seeds of this hatred are spread, beginning at primary schools, through books printed by the Ministry of National Education portraying Christians as enemies and traitors. The indoctrination continues through newspapers and television channels in line with state policies. And of course, the sermons at mosques and talk at coffee houses further stir up this hatred."

In other words, Turks, once "secular," are now educated to hate Christians.

Notably, even that is not enough to prevent ISIS from accusing Turkey of being a "servant of the cross".

Just what, then, do so-called "radical" Muslims — between 63 and 287 million Muslims support ISIS in just eleven nations — regard as the "proper" treatment of Christians?