WHO Corruption: Globalist Technocrat Bill Gates Donates More to WHO Than Most Countries 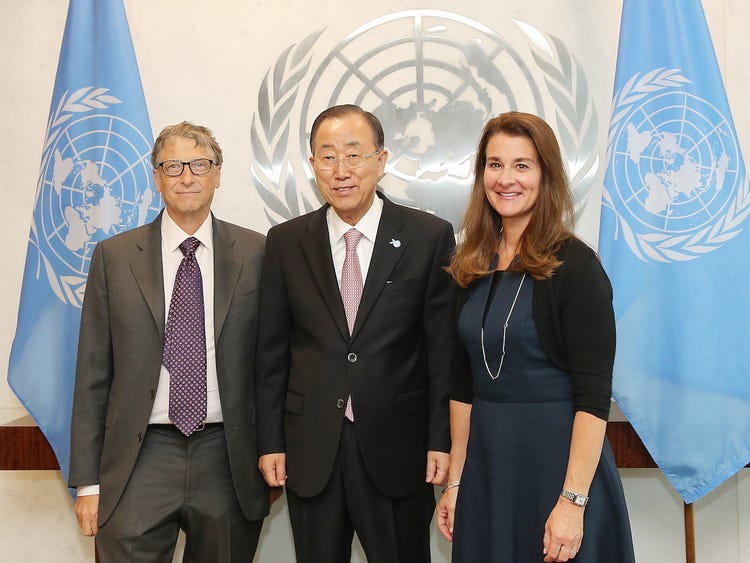 In this two part posting, I want to take a look at one individual who has been highly influential in the current COVID-19 pandemic narrative.  In part one, we'll look at who this individual is and how much he has contributed to the World Health Organization and in part two, we'll look at his vision for a post-pandemic world.
The current pandemic narrative has been driven, in large part, by the World Health Organization or WHO.  It is this quasi-governmental body that was responsible for declaring the pandemic on March 11, 2020, weeks after it had already spread across the globe as shown here: 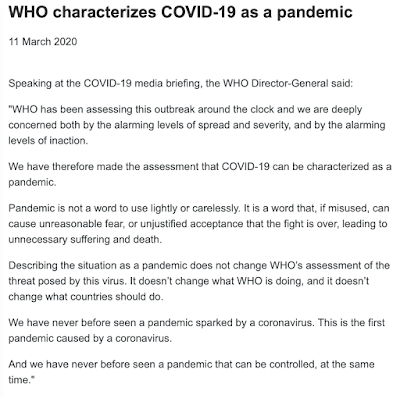 Like me, while you may have heard about WHO prior to the current pandemic, you are unaware of exactly what it is.  According to the WHO website, the organization's genesis can be traced back to April 7, 1948.  It was established as a specialized agency within the terms of Article 57 of the Charter of the United Nations and has the following objective:
"The objective of the World Health Organization shall be the attainment by all peoples of the highest possible level of health."
Here is a graphic showing WHO's history:

Here is part of its Constitution outlining its functions: 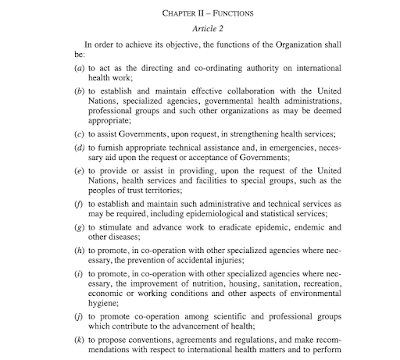 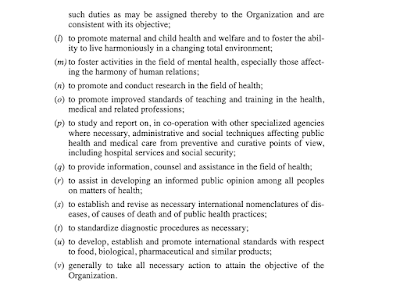 Membership is open to all states and members of the United Nations may become members of WHO by signing or accepting the WHO's Constitution.
Who are WHO's stakeholders?  Here is what WHO has to say:
"Diverse global health stakeholders engage with WHO.
We work closely with decision-makers: Ministries of Health, government agencies, other government departments at the national level.
We also work with influencers: health partnerships, foundations, intragovernmental and nongovernmental organizations,  civil society, media, professional associations, and WHO collaborating centres.
Our engagement with the United Nations at the global, regional, and country level is also a major asset."
One question that you may have is who exactly is it that funds the World Health Organization?  Fortunately, WHO provides us with an annual listing of voluntary contributions: 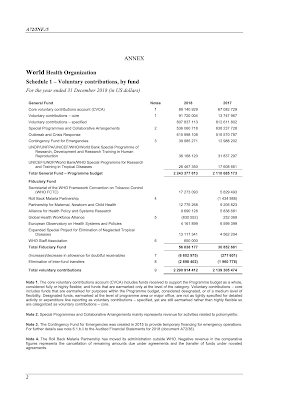 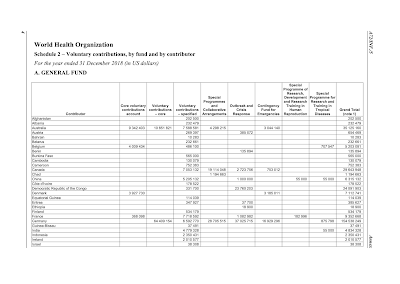 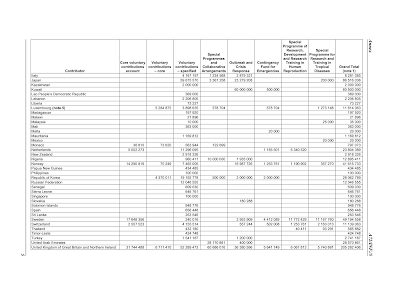 In fiscal 2018, the United States was the largest member state contributor to WHO with a grand total of $281.063 million in donations.  The United Kingdom came in second place among member states with donations  totalling $205.262 million and Germany came in third place among member states with donations totalling $154.538 million.
You might be surprised to find that there are other significant non-state donors to WHO.  By far, the largest non-state donor is none other than the Bill & Melinda Gates Foundation which donated a total of $228,970,196 or 10 percent of all voluntary donations to the World Health Organization in 2018, putting the Gates family in second place among all donors, member states included.  Here is a screen capture in case you need proof:

Just in case you might happen to think that 2018 was an anomaly, in 2017, the Bill & Melinda Gates Foundation donated $324.654 million to the WHO, again putting them in second place among all donors after the United States government which donated $401.109 million.  In 2017, the Gates family foundation was responsible for 15.2 percent of all voluntary donations to the World Health Organization.
Let's look at one additional donor in 2018.  According to the WHO, Bill and Hillary Clinton's Clinton Health Access Initiative, an initiative of the Clinton Foundation, is in there too, donating "only" $289,324 to the cause.  Cheapskates!
Let's close with the World Health Organization's recent suggestions to help us all maintain what little sanity we have retained during the imposition of "medical martial law": 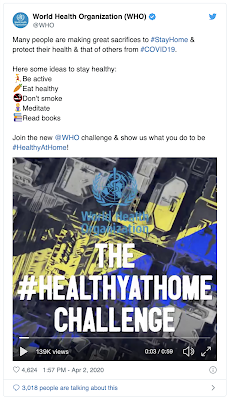 Healthy at home.  Thanks Bill, that's just what we all needed to get us through this home-based lockdown.
Let's put this into perspective.  Bill Gates, the man who recently said all of this:
...and who lives in a 66,000 square foot house and who doesn't have a university degree is suddenly a virologist/epidemiologist, is quite clearly telling the unwashed masses that we have to be prepared to be unemployed and in lockdown in our humble homes for an indefinite period because of the COVID-19 pandemic.
Remember this.  The World Health Organization, the body responsible for managing global pandemics policies, is brought to us by the man who so kindly gave us Windows Vista.

Stay tuned for part two of this posting where we will take a closer look at how Bill Gates believes that governments should handle our post-pandemic world.
Originally appeared at: Viable Opposition