You signed up to serve your community, to do your duty. You have undertaken years of training in exacting procedure to learn how to deal with every conceivable dangerous scenario. If you fail to follow procedure, you will lose your job, your income, your sense of purpose, and--worst of all--the comradeship of your fellow officers.

Every time you interact with someone on the street, you are in danger of losing all that. One decision could make you a hero, or it could land you in national news as the face of “police brutality.” Overreact, and you will be an outcast. Underreact, and you could be killed.

Now, you are faced with the most thankless task of all: policing throngs of arrogant, spiteful Jews.

After weeks of notices, entreaties, and, at last, warnings, New York’s Hasidic “ultra-orthodox” Jews are still swarming into the streets. They have been told again and again that by holding mass-gatherings, they are endangering not only themselves, but other people as well. The more people that gather, the faster people get sick, the greater the burden on health-care workers is.

Yet they still gather, in defiance of the law, of common sense, and of the well-being of their fellow citizens.

What can you do?

Should you order them to disperse? You have tried, and they keep coming into the streets. They disobey because they view you as an enemy. They do not recognize your authority. They hate you, and they think they are better than you.

Should you arrest them all? You will put yourself at greater risk, and you will be blamed if anything goes wrong. And why bother? No one in the prosecutor’s office is going to have the guts to bring up charges anyway.

Should you employ riot-control measures like tear-gas? You can already imagine what sort of headlines will be written if you follow this course. “NYC Police Gas Innocent Jews!” Gas is only for whites (and, in extreme circumstances, blacks). Jews are inviolate.

To add insult to injury, the press is slandering you and calling for insurrection against you.

They are doing this not because they want you to take any particular course of action, but because they want to coerce you into making a mistake. Whether you enforce the law or not, the Jewish complainers win. The Hasidic Jews will be left to do as they please. The media Jews and their lackeys get to bludgeon you (and any other non-Jew who stands up for himself) into submission. 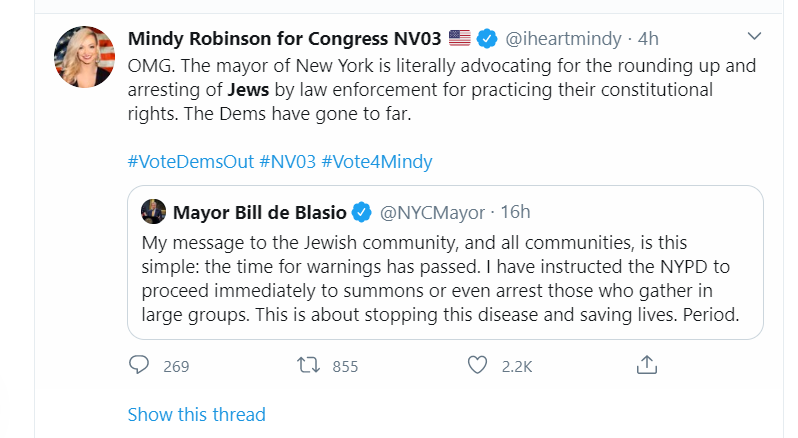 Some will point out that “not all Jews” are like this, and it’s unfair or “anti-semitic” of me to call out Jews generally for the misbehavior of a sub-group of Jews. But note this: the non-Hasidic Jews in politics and the press benefit from the Hasids’ hysterics. Whenever the ultra-orthodox flout the law, the media Jews get to complain that you are enforcing the law… against Jews! And by complaining, they get to bully everyone else into ceding more power to Jews, since, they allege, Jews are always oppressed and it isn’t fair to criticize them. Cui bono?

They will demand more deference, and more money from the government for “security.” And they will get it.

But here is what all Americans need to understand:

Legitimate authority does not defer to complainers. It judges people’s actions objectively, and treats them according to their worth. A just leader knows that the best man is usually the one who asks for the least. Most law-men know this instinctively.

But in a corrupt regime like ours, everything is backwards. Whoever whines loudest is served best. The Hasidic Jews are champion whiners, and that is why they can get away with anything. The philosopher Plato noted that in a democracy, parents and teachers come to fear their children and their students. He might equally well have observed that, in a democracy, policemen come to fear criminals.

So policeman, you are serving a system that hates justice, and hates you for trying to uphold it. For now, you have little choice but to go along with it. But you need to realize what your place is in this. Because one day, things are going to change. I am not telling you to break the law. I am not inciting you to insurrection. But I promise you, that you will, sooner rather than later, find yourself faced with an unpleasant choice.

The time will come, when you have to make the ultimate political decision.

Will you side with the arrogant whiners and tyrants who have taken over your city and your country?

Or will you side with your conscience, and stand up for what’s right?

Israel May Ask for 2x Its Usual $3.8 B From the US This Year ($14k per Minute)
Zionist Lobby Gives Majority of Funds to Democrats to Keep Them in Line
While US Is in Crisis, Congress Submits 68 Bills (And Counting) for Israel