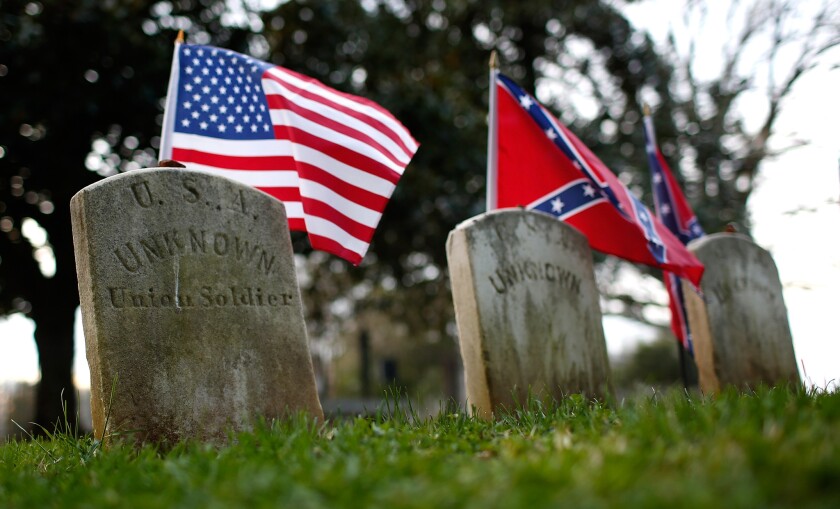 THE NEW YORK TIMES HONORS MEMORIAL DAY AS ONLY THEY CAN: Why Does the U.S. Military Celebrate White Supremacy?

I'd seen this vile thing, but unlike Instapundit, and actor James Woods below, I had failed to connect it to Memorial Day:

The New York Times celebrates Memorial Day by equating the United States military to the Ku Klux Klan. Is anyone surprised anymore? https://t.co/xrLB4Ja29e

What the New York Times Editorial Board is condemning is the existence of places like Fort Bragg, home of the Airborne, which commemorates Confederate General (and graduate of West Point) Braxton Bragg.

After crowing about its success in linking the Confederate Battle Flag to "white supremacy" and bannning it, in Orwellian fashion, everywhere from stores to statehouses, after Dylann Roof's Charleston mass shooting, the New York Times goes on:

This same toxic legacy clings to the 10 United States military installations across the South that were named for Confederate Army officers during the first half of the 20th century. Apologists often describe the names as a necessary gesture of reconciliation in the wake of the Civil War. In truth, the namings reflect a federal embrace of white supremacy that found its most poisonous expression in military installations where black servicemen were deliberately placed under the command of white Southerners — who were said to better “understand” Negroes — and confined to substandard housing, segregated transportation systems and even “colored only” seating in movie houses. (Link in original)

The post-war reconciliation between North and South—based on mutual respect between the mostly white combatants on both sides—may have been the most important factor in America's rise to world greatness.

Many of America's most famous warriors were Confederate-Americans: Patton and Chesty Puller are obvious examples. The only people who object to this reconciliation are people who feel that American history is somehow about black people.

Here's an important point: not even the Civil War was really about black people, though slavery was on everyone's mind during and before the War.

Memorial Day is about honoring America's war dead, and in a way, symbolizes the reconciliation of the two sides.

Memorial Day came into being after the Civil War, as "Decoration Day", a day for memorializing the honored dead, of whom there were a great many, by decorating their graves with flowers.

Because America remained divided, there were actually two Memorial Days celebrated—many parts of the South still proclaim "Confederate Memorial Day" on a different date. The women of Columbus, Mississippi famously decorated the graves of soldiers on both sides in April of 1866, giving rise to a celebrated poem by Francis Miles Finch:

No more shall the war cry sever,
Or the winding rivers be red;
They banish our anger forever
When they laurel the graves of our dead!
Under the sod and the dew,
Waiting the judgment-day;
Love and tears for the Blue,
Tears and love for the Gray.

There have been enough foreign wars since then that Northern and Southern bodies are found in military cemeteries in about equal measure. That North and South were fighting external enemies together was part of the Great Reconciliation that is described in Paul H. Buck's 1937 book, The Road To Reunion 1865-1900. (This book is now unpopular—and so is the actual post-Civil War reconciliation.)

The New York Times, on the other hand, is staffed by people like Sarah Jeong.