Inefficiencies of Globalization in International Shipping

The tradition here at Of Two Minds is to make use of April Fool's Day for a bit of parody or satire, but I'm breaking with tradition and presenting something that is all too real but borders on parody: the wonderful insanity of globalization.

Like the famous emperor with no clothing, globalization's countless glorious benefits have been flogged by neoliberal elites and its corporate media shills with such relentlessly manic enthusiasm (let's call it what it is: a form of greed-fueled insanity) that the average worker has come to accept the wonderfulness of globalization as a natural force much like gravity: it's inescapable.

Meanwhile, the globalization emperor has no clothes. Globalization has generated a wonderful (satire alert) insanity in which efficiencies and fragilities are ignored and fatal excesses are deemed worthy of frothy praise: look at the emperor's fine garments!

This is how we've reached the level of insanity in which 90% of essential medications and their components are manufactured by our geopolitical rival. Other examples of the insanity of globalization are too numerous to list, but let's consider the route that the vaunted supply chain actually takes to get Product A from China to an American consumer.

According to the holy scripture (pun intended) of globalization, comparative advantage overcomes any inefficiencies due to long supply routes: if the $100 product can be made in China for $50, then the enormous profits reaped by moving production to China more than make up for any transport inefficiencies or systemic fragilities created by the long supply chain.

In the happy story of globalization, cheap container ships merrily haul billions of dollars of profitable goods across thre Pacific for next to nothing in costs. Perhaps, but let's look at a real-world transport route from China to the U.S. for one not-very-costly product which was air-freighted.

Please gaze in awe at the incredible efficiencies of a global supply chain that ships the product from Beijing, China, to ZhengZhou, China, to Incheon, South Korea, to Anchorage, Alaska, to Louisville, Kentucky, to Ontario, California, and from there to its mid-Pacific destination, Honolulu, Hawaii.

The obvious efficiencies of "the last 10,000 miles" are, well, so obvious they need no further elaboration. Even with jet fuel cheaper than soft drinks, the cost of flying, staffing and maintaining aircraft costing tens of millions of dollars is non-trivial, but apparently all that flying across oceans and continents and then back again is a truly excellent means of reaping enormous profits for everyone involved.

Or not. So here's an April Fools congrats to globalization's many fools. 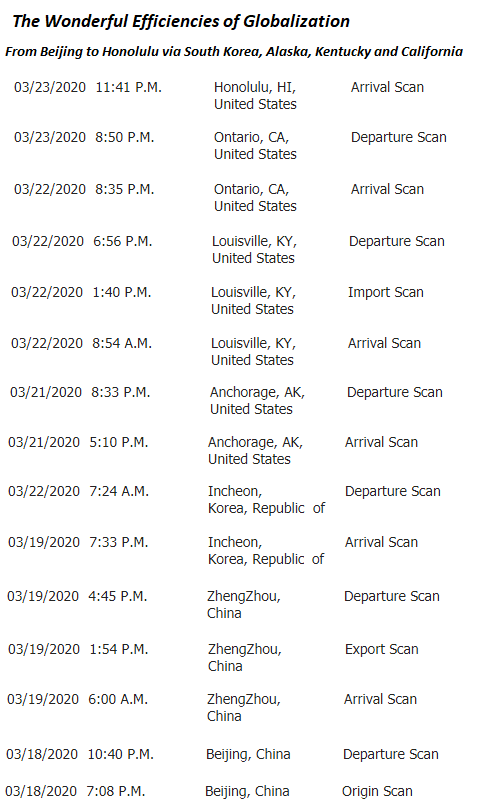 Originally appeared at: Of Two Minds