The Flawed US Election Process: 2 Bad Choices Isn't a Choice

It appears that American voters will have to choose between Donald Trump and Joe Biden to be our next President. Both of these men are old. Biden sports signs of dementia and has been accused of corruption. Trump is considered divisive and not as truthful as many people would like. It could be said many voters are not jumping with joy.

To say America has a flawed election process is an understatement. Early in each Presidential primary season, it becomes clear that we suffer from a defective election system. Over the years televised debates have not been of much help. Efforts to remove the process from power brokers in smoke-filled rooms has not drastically improved the system. The people who have the least say in this system remain the average voter. The political debates highlight our flawed election process.

America's primary system is not geared to putting the best-qualified choice in a position to move on but unfairly places the decision in the hands of voters in a few early primaries. These voters casting their ballots months before the rest of us set in motion a culling process that often nullifies our voice. I wrote a similar article four years ago highlighting the poor choices such a system can produce. Sadly, like in 2016, it again appears, we as a country will be forced to choose the least of two evils when deciding which candidate to elect President.

Reform of the election processes would benefit the country in selecting better leaders. A few years ago the animated comedy South Park produced a line that eloquently describes the choice before us. "an election decision usually comes down to a choice between a giant douche and a turd sandwich." I contend even the political debates highlight America's flawed election process in that while presenting us an opportunity to preview the Presidential contenders it does not result in anything more. This superficial peek at candidates so they can be weighed and measured to see if they have the right stuff is simply a dog and pony show.

When the Presidential primary debates begin to fill the airways the media is chocked-full of  stories about the individual candidates and their prospects. Speculation, spin, and unlimited efforts by the media to influence our decision as to who will become America's next leader go into full swing. Sadly, the people who will most likely have the least say are voters like you and me. These flaws become most evident when we are faced with actually narrowing down the choices before us.

Our political system was structured in a way that may have been acceptable in the past or when our country was first formed but since then it has morphed into an inefficient costly mess. This often results in not putting the best-qualified choice in a position to move on and has in recent decades concentrated the decision in the hands of a few voters in early primaries. By casting their ballots months before mine my vote is greatly devalued. By the time my state primary takes place, it no longer matters and the choice has been made for me.

Moving to the general election the process fails to improve. In the general election, any third party candidate hellbent on making a point can easily derail either party by drawing even a few votes thus having a major influence on who is elected. America’s presidential system is far from perfect and the flaws are exacerbated by the influence of the Electoral College. This misunderstood institution takes over after the general election and discounts the votes of many Americans voiding the idea that the person getting the most votes should win. 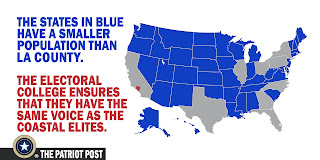 This dinosaur created by our founding fathers created a buffer between the population and the selection of a President it also gave extra power to the smaller states. Over time this institution has grown obsolete and has become an obstacle to seeing all votes carry equal weight. In our system, the "outdated" electoral college makes the final call on who is elected. This means certain key states and "swing states" are guaranteed to get all the attention and the rest of us will be treated as an afterthought or second class citizens.

Flipping one swing state is the key between winning and losing. As noted earlier, in our current system the announcement of any "third party candidate" can quickly skew the results, this means candidates with an important message become "a spoiler" that can deny the best choice any hope. Our current system promotes the gridlock that polarizes our nation. It is geared in a way that a small active group at either the far left or the far right of the political spectrum gains far too much influence and this often leaves us forced to chose between the worst of two evils.

The best way to determine if a system needs change is to look at its goal or purpose. It is logical to think that if a group of intelligent people unencumbered by bias or partisan politics entered a room to devise a better process they would emerge with a far better system than currently exists. While all these systems have their supporters, much of this support is based on partisan politics. Reform of all these processes would benefit the country to choose better leaders.

The fact that positive change is highly unlikely does not mean a discussion as to how it can be reformed should not take place. For example, while "the winner takes all" primaries are quick and often less divisive to political parties, the notion that we should unite behind a flawed or lesser candidate because he or she is better known or financed makes no sense. I consider these "winner take all" contests an unfair way to allocate delegates. As noted earlier, often by the time my state primary takes place it no longer matters and the choice has been made for me.

Across the world, Instant-runoff voting is used to elect those that best represent the choice of the people whether choosing a country's leader or a city mayor. This system is devised to let the best talent and most qualified candidates work their way to the top.

Years ago I realized a person does not have to know everything, but it is more important to know where to get the right answers, thus I defer to Wikipedia. On their site, they delve into the processes known as instant-runoff voting (IRV), alternative vote (AV), transferable vote, ranking choice voting, and preferential voting. These are variations of systems used to elect a winner from a field of more than two candidates in which voters rank the candidates in order of preference rather than voting for a single candidate. IVR has the effect of avoiding split votes when multiple candidates earn support from like-minded voters.

Some countries have devised ways to have quick elections and systems based on a run-off process where only the top two choices move forward. In such a system, ballots are distributed based on the first choice of each voter and if a candidate receives more than half the votes a winner is declared. If not the candidate with the fewest votes is dropped and ballots assigned to the eliminated candidates are recounted and added to the totals of those still in contention based on who is ranked next on each ballot. This continues until one candidate wins by obtaining a majority of the votes.

Sadly, even an incredibly fair and sound plan that substantially improved the process would not have a prayer of getting through our political system because the vested interest of those in power have little interest in such things and hold us hostage. Our two-party system and partisan politics tend to gravitate towards a system that eases getting the party's slated candidate elected or blocks an opponent, I reject that goal. We should elect officials that most represent the views and desires of a majority of the people while protecting those on the political fringe.

It is time to put each vote on equal footing. Today with instant communication and no area of the United States more than a few hours away by jet the least we can do to improve the election process is to eliminate the electoral college which skews attention during Presidential campaigns to key “swing states” and taints an already lengthy and expensive process. The cost of maintaining this antiquated dinosaur runs a billion dollars a year but no longer yields any real benefit and is in many ways harmful.

With our current system, we always find the election teetering  on a few hundred votes in states such as Ohio or Florida. Another major flaw with our current system is that  the announcement of any "third party candidate" can quickly skew the results. These candidates with a message can rapidly become "a spoiler" that denies our true or best choice any hope. All this magnifies the stupidity our Electoral College now brings into the current process.

Over the recent years, we have witnessed countries torn apart by burning, killing and tribal mayhem because the leaders in power stole the election, it should be pointed out that the winner-takes-all attitude is partly responsible for this problem. When the people's voice is ignored and both sides see the stakes too high to admit defeat the system will lose broad support. How ironic that all those constantly calling to crush inequality are busy scurrying about demanding that all votes treated as equal never place this into their line of vision.

How the Left Creates Fake Studies to Fabricate Right-Wing Terrorism

Dontell Jackson (We Thought They Were White)
2,020

Dontell Jackson (We Thought They Were White)
2,020