A staggering 9% of working Americans, or 14 million people, have been laid off as a result of the Chinese coronavirus panic, while 25% of workers have had their hours reduced according to extrapolated polling by Survey USA.

A SurveyUSA poll taken one week ago showed just 1% of Americans would take home no paycheck.

Virtually every American was either laid off or has family members & friends who have.

I know AN ENTIRE IMMEDIATE FAMILY (husband,wife,two adult children & their 2 spouses) all laid off in last 72 hours.

Of note, in California alone, Governor Gavin Newsom said on Thursday that unemployment insurance filings had spiked by 80,000 on Tuesday alone, vs. the usual rate of around 2,000 per day.

Meanwhile in Ohio, jobless claims have spiked to nearly 140,000 vs. last week.

and so it begins

Early markers on the road from recession to depression as the Coronavirus threatens to stop the world from spinning on its axis show that 1 in 4 working Americans have had their hours reduced as a result of COVID-19, according to SurveyUSA's latest time-series tracking poll conducted 03/18/20 and 03/19/20.

Approximately 160 million Americans were employed in the robust Trump economy 2 months ago. If 26% have had their hours reduced, that translates to 41 million Americans who this week will take home less money than last, twice as many as SurveyUSA found in an identical poll 1 week ago. -Survey USA

Methodology: SurveyUSA interviewed 1,000 USA adults nationwide 03/18/20 through 03/19/20. Of the adults, approximately 60% were, before the virus, employed full-time or part-time outside of the home and were asked the layoff and reduced-hours questions. Approximately half of the interviews for this survey were completed before the Big 3 Detroit automakers announced they were shutting down their Michigan assembly lines. For most Americans, events continue to unfold faster than a human mind is able to process the consequences.

And Goldman Sachs' research appears to confirm this ugliness, as they compile anecdotes from recent press reports and company announcements to estimate the magnitudes of the increase in layoffs and decline in consumer spending due to the virus.

March data available thus far show a sharp contraction in US activity, with very weak manufacturing surveys, a 33% increase in initial claims over the last week, and large declines in our monthly activity nowcast and the high-frequency indicators we are tracking to gauge the impact of the coronavirus.

Many US states have reported unprecedented surges in jobless claims this week and Goldman estimates based on these news reports suggest that nationwide jobless claims will rise to roughly 2¼ million (seasonally adjusted) in the next claims report covering the week of March 15-21, a roughly nine-fold increase over the pre-virus level.

Here are the key data points available so far by industry below.

Hotels are expecting to run at much lower occupancy rates than usual.

Many states have banned in-person dining in restaurants and bars, although takeout and delivery are typically still available.

Almost all airlines have announced cuts in capacity, and ridership on trains and buses is also down.

Many major events have been cancelled, and services involving large scale gatherings are likely to be very limited.

Goldman is not alone, BofA warns that jobs will be lost but even more hours will be cut.

We expect a total of approximately 3.5 million jobs will be lost with the biggest hit in 2Q of 1 million per month. This will send the unemployment rate higher, nearly doubling to 6.3%. The industries to be hit the hardest are leisure & hospitality and retail. These sectors have a high share of hourly workers - about 80% for the former and 70% for the latter. And these workers struggle to work from home. This means they are vulnerable to a reduction in hours worked and likely outright job cuts.

We look for initial jobless claims to spike to 3 million in the week ending March 21st, reflecting the mass layoffs/furloughs across the country due to the COVID-19 outbreak.

On the spending side, the numbers are even more devastating, as Goldman shows: 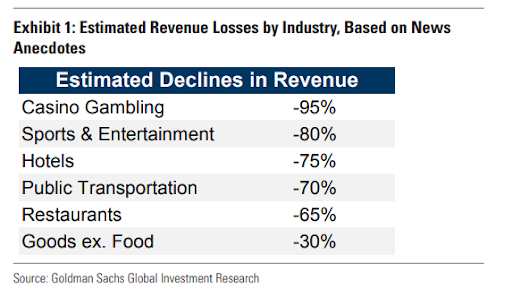 Finally, the interest in unemployment-related services continues to rise...

China Hints at Blackmail Over Pharmaceutical Exports, Would 'Plunge Us Into Mighty Sea of Coronavirus'
Ibuprofren May Increase Lethality of Coronavirus
Israel's Low Fatality Rate May Suggest COVID-19 Is Israeli Made Bioweapon