Democrats’ HEROES Act Is a Huge Giveaway to the Rich

House Democrats’ latest stimulus bill, the HEROES Act, is designed to lay out the party’s basic principles for coronavirus recovery. Unfortunately, those principles include Democrats being very happy to shore up corporations’ and billionaires’ profits and political control of Washington. 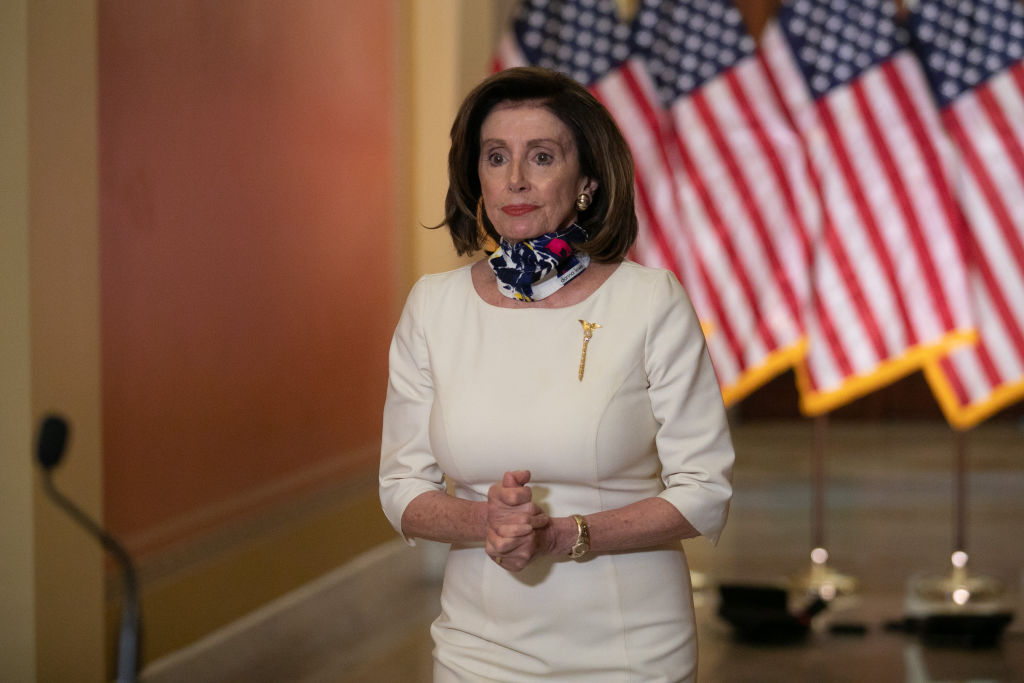 Editor's Note: The following article is from a leftist publication. We occasionally run leftist articles when they explore interesting viewpoints typically not found on the right (e.g. healthcare reform). Please ignore any pro-globalist/tranny/migrant/etc. drivel you find mixed in. Thank you!

On Friday, House Democrats passed the HEROES Act, a bill meant to outline Democrats’ core principles in their negotiations with Senate Republicans about additional stimulus measures to deal with the coronavirus crisis.

The legislation has some good items. It would help ensure that all voters can vote absentee this fall, an absolute necessity given that COVID-19 isn’t going away. The bill includes another round of $1,200 stimulus payments to individuals, which is less than progressive lawmakers wanted, but at least it’s money that normal people get. Undocumented immigrants would get checks this time. It has funding for hazard pay for essential workers.

But if this indeed is a message bill rather than a final proposal, then the newsiest part of the legislation is Democrats’ desire to send a reassuring message to monied interests — one that deliberately lets corporations and billionaires know that the party is intent on fortifying the industry groups that already control Washington.

Since the pandemic started, 27 million Americans have lost their employer-based health insurance. Instead of covering the uninsured through Medicare or Medicaid, Democrats decided it would be better to pay COBRA premiums through January for people who have lost their health insurance. COBRA is expensive and wouldn’t help Americans who were already uninsured — but the move would deliver more revenue to the health care industry that wants the government to pay top-dollar to keep people on the insurance plans they just lost.

Beyond the proposed COBRA gift, Senate majority leader Mitch McConnell and Republicans are insisting that business groups’ top priority be included in the next stimulus round: a liability shield from lawsuits if their employees and customers catch coronavirus. While Democrats have been calling the idea a nonstarter for weeks, House speaker Nancy Pelosi said on Sunday: “We have no red lines.”

This isn’t merely a wasteful boondoggle giving away resources to groups that don’t need it (though it is that, too). This is a proposal to use public resources to politically strengthen the 1 percent that already owns Washington, and that routinely kills legislative initiatives that would help the 99 percent.

In short: this is the Democratic Party willfully pushing to use government money to bolster the very forces that block progressive change.

Over the past few weeks, lawmakers and big lobbying groups have been sending around letters calling on Congress to expand the PPP to include 501(c)(6) trade associations. Many of the letters have focused on the difficulties of local chambers of commerce to stay afloat during COVID.

Earlier this month, a handful of lawmakers introduced legislation called the “Local Chamber, Tourism, and 501(c)(6) Protection Act.” The legislation would apply to trade associations with 300 or fewer employees.

Democrats’ stimulus bill expanded that to all nonprofits — of any type and any size. It would reserve 25 percent of existing PPP funds for nonprofits, and set aside half of the money for nonprofits with less than 500 employees, which House Democrats described as “small nonprofits.”

If you follow me on Twitter, you have probably seen me ranting about this bill. Late last week, I helped launch an advocacy group specifically to challenge the idea of a lobbying group bailout. I did it because I covered DC lobbying groups as a reporter, and the idea that Congress should give them access to small business forgivable loans — effectively contributions — is absolutely insane. Totally batshit.

The term “trade association” may sound harmless enough, but they are not harmless, and they are not small businesses. They are some of the most powerful lobbying forces in Washington, raising tens or hundreds of millions of dollars each year and representing some of the largest corporations on the planet. We’re talking lobbies for oil and gas giants, electric utilities, chemical manufacturers, industrial meatpackers, and Hollywood production companies.

While House Democrats pretend their bills are for “small nonprofits,” they must know that their legislation could funnel cash to the biggest trade associations in Washington. IRS data shows that 99.8 percent of trade groups have fewer than 300 employees, and 99.9 percent have less than 500 employees.

Even the powerful American Israel Public Affairs Committee (AIPAC), a (c)(4) nonprofit with $105 million in revenue and 466 employees in 2018, would likely qualify.

After the Democratic Policy Center and a few independent media outlets spotlighted this giveaway late last week, House Democrats did make some changes to the provision. They added language barring PPP loans to 501(c)(4) groups that make political expenditures, which are generally known as dark money groups. That’s a good move.

They also included perfunctory language blocking lobbyists’ compensation from being covered by PPP loans, but this is fairly meaningless, given the entire purpose of DC trade associations is to influence policy. Big lobbying groups still get free money.

None of the changes negate the underlying point — Democrats are intent on using the coronavirus crisis as a justification for siphoning money from mom-and-pop small businesses and giving it to Washington lobby groups whose political action committees have delivered more than $191 million to current members of Congress in the last two decades.

Now, I know what you are thinking: If the bailout for trade associations is so corrupt, why haven’t we heard more about it? Why hasn’t it been a controversy among politicians and splashed all over the media? The silence probably has something to do with how the groups avoid negative news coverage by paying big money to sponsor Beltway media newsletters and the larger Washington ecosystem.

PhRMA, for example, has sponsored Politico Nightly, the outlet’s special edition coronavirus newsletter, for much of the past month and a half. “In these unprecedented times, America’s biopharmaceutical companies are coming together to achieve one shared goal: beating COVID-19,” the organization wrote in one email. Wow! Thank you all for your service.

Trade groups and nonprofits host ritzy conferences where congressional leaders come to share updates with their lobbyists about what’s happening in the Capitol — as if the lobbyists don’t already know.

Just last year, I listened to Pelosi, McConnell, Richard Neal, and Donna Shalala talk at an annual conference held by the American Hospital Association (AHA). The AHA’s top lobbyist predicted at the conference that Pelosi wouldn’t let Medicare for All come up for a vote this Congress. She hasn’t let him down.

Trade associations are prohibited from paying lawmakers speaking fees while they’re in office anymore — they used to, seriously — but they can pay recently retired politicians like Paul Ryan and Jeff Flake to speak at their conferences, alongside prominent journalists and political pundits.

I traveled to Nashville last year to attend an AHIP conference as a reporter. The star of the event was Bob Woodward. Yes, the legendary Washington Post investigative reporter, who helped uncover Watergate, does speaking gigs with industry lobbying groups — that’s exactly how normalized this shit is. Woodward was close to incoherent, but the crowd loved it. It was a special Sunday show-style interview just for them.

Woodward was not an anomaly — read this report to see how common it is for trade associations to sponsor journalists who are supposed to be objectively covering the news of the day. It is so common, in fact, that there’s a vernacular term for it: “buckraking.”

Trade associations aren’t just a feature of Washington — they run the place, and not just in the halls of power. It’s common for lobbying groups to fund 501(c)(4) groups or other 501(c)(6) trade associations to run full-scale advocacy campaigns. In fact, organizations can do this without ever publicly disclosing the groups they paid to run TV ads, for astroturf strategies, etc. It’s a neat quirk that groups can exploit to whatever degree they feel like.

To give a startling example, the insurance industry’s trade association, AHIP, secretly funneled $100 million to the US Chamber in 2009 and 2010 to bankroll its campaign against the Affordable Care Act, which ultimately helped convince Democrats to scrap its public health insurance option. Because AHIP wasn’t publicly leading the opposition campaign, they were able to stay involved in negotiations over the legislation. Specifics about the cash transfers were never formally disclosed in public tax forms. AHIP simply reported spending an obscene amount of money on “advocacy.”

It’s worth noting that AHIP’s revenue ballooned during the health care reform fight, increasing from $70 million in 2008 to $185 million in 2009. When trade group executives sense real legislative threats, they can simply demand extra dues from their corporate members, who have close to limitless resources.

In light of this, when Democratic politicians say that progressive policy solutions like Medicare for All or a Green New Deal aren’t realistic or can’t pass, what they mean is that there are trade associations with deep pockets that will raise all hell if Congress considered trying to enact them. Groups would fund national ad campaigns about government bureaucrats and people losing their doctors, and scare weirdo Fox News viewers into a frenzy.

It’s easier for Democrats to just play nice with lobbying groups and push for small tweaks to the system that big corporations can profit off of — even if it means Americans have to keep avoiding medical care or face crushing debt, or that people all around the world must live through record heat waves, deadlier hurricanes, and rising sea levels.

Any progressive, pro-democracy movement should know that trade associations are among the biggest roadblocks to building a government that actually responds to ordinary people, rather than corporate interests.

And yet, 207 House Democrats — and most of the progressive caucus — just voted in favor of a bill that could give these already well-funded groups a new infusion of free money that is supposed to help small businesses survive COVID.

Democrats call this legislative statement of principles their HEROES Act. The bill is an incriminating confession that the opposition party wants to be heroes for the rich and powerful.