When a house is on fire nobody has time to think about the future. All effort is on extinguishing the fire and save what’s left. That’s the Fed’s role right now dousing the burning economy and market duplex with zero rates and unlimited QE.

Never mind that they greatly contributed to the severity of the fire with their ill advised cheap money policies over the last 10 years.
But let them fight the fire and let’s hope it’s successful to at least extinguish this latest crisis.

But don’t think for a second there won’t be larger consequences. This is not your ordinary crisis. This is a disaster, a medical disaster that has rapidly morphed into the greatest economic crisis of our lifetimes. 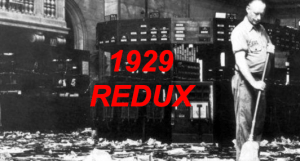 And don’t compare it to 2008. That ship has already sailed.

This beast here is much more ferocious in speed and impact than 2008:

2008 seemed kinda orderly in comparison to this disaster.
No wonder the Fed is in absolute freak mode.$XLF pic.twitter.com/J2ie92WlC9

The economic impact of the virus coupled with the crushing effect of stretched valuations reverting to the mean is so dramatic that we are now seeing stimulus programs and central bank interventions that make 2008 look like child’s play.

And so I have to ask: What’s at the end of this tunnel?

Let’s say we get out of this and the shock can be minimized and the virus disappears and we get a recovery of sorts. What are the long term consequences of the most indebted global economy ever adding even more debt?

What are the consequence of millions seeing their retirement dreams decimated?

You really think a stimulus package is going to bring all these jobs back overnight? No way.

Indeed we already see companies laying off people by the thousands, not just temp jobs but full time jobs. The cost cutting has begun out of necessity:

.@GeneralElectric is cutting about 2,600 US #jobs in its jet engine division as the aviation industry gets crushed by #coronavirus: https://t.co/cEXpGytHT4 $GE

This is just the beginning. A supply shock is turning into a demand shock by the time this is all done.

And so the structural issues long ignored will not be magically be solved by stimulus or central bank intervention. In fact they were never solved over the past 11 years of this cycle. They were just masked by cheap money and debt.

No, this shock is so drastic that we only really have one comparison. The roaring 20’s of a century ago.

Those were some of the headlines back then:

Replace billions with trillions and there ya go.

The economic fallout back then was a disaster, not for a few months but for several years. Excessive speculation, unrealistic valuations and then a trigger and it was over.

A steep dramatic crash off of all time highs:

That first crash in 1929 was just the beginning not the end. But note that big rally following that first crash. It ran for several months producing a 48% rally into 1930. Bullish right? Well for a nice long trade yes but then it turned into a valley of tears of lower highs and lower lows all the way into 1932.

Think this is all far fetched?

Oh I know, analogs, to be viewed with caution but structurally that bull market back then ended the same this one just did: Following a period of excess with a final blow-off top. And make no mistake: We just had a blow-off top in that time period between October and February leading up to the 2020 crash.

The 1929 redux tells us a big rally will come, either from here or from lower first still, and this rally will be awe inspiring, it’ll produce technical reconnects in a market that is now widely disconnected to the downside and it will bring back optimism. But then the historical script suggests lower highs to come as the world is then confronted with the consequences of the costs of extinguishing this fire. The bill comes due as the world will be settled with even more debt, but now a much higher unemployment rate, poorer consumers, and companies focused on margin efficiencies.

1929 redux is staring us in the face and it says this won’t be a “V” recovery. This will take years of heightened volatility and wide price ranges to negotiate through and the first really big counter rally may prove itself to be a big fat sell. No matter how much the Fed prints.

But that’s a discussion to be had once we’ve had this rally. For now markets are still in process of finding a bottom and now that the Fed has launched unlimited QE markets are still selling off. Not exactly confidence inspiring. All hope then on that big stimulus package to come.

Best hope that will do the trick:

If that stimulus package does not succeed in producing a sustained rally then hug your quarantined self.

mean, what else is left following that? Failure is not an option, but failure is already programmed into the historic script of the 1929 redux. So be aware of that script once that big counter rally emerges and get’s everybody all cheerful and optimistic again.