China's Move in Hong Kong Illustrates End of US Superiority 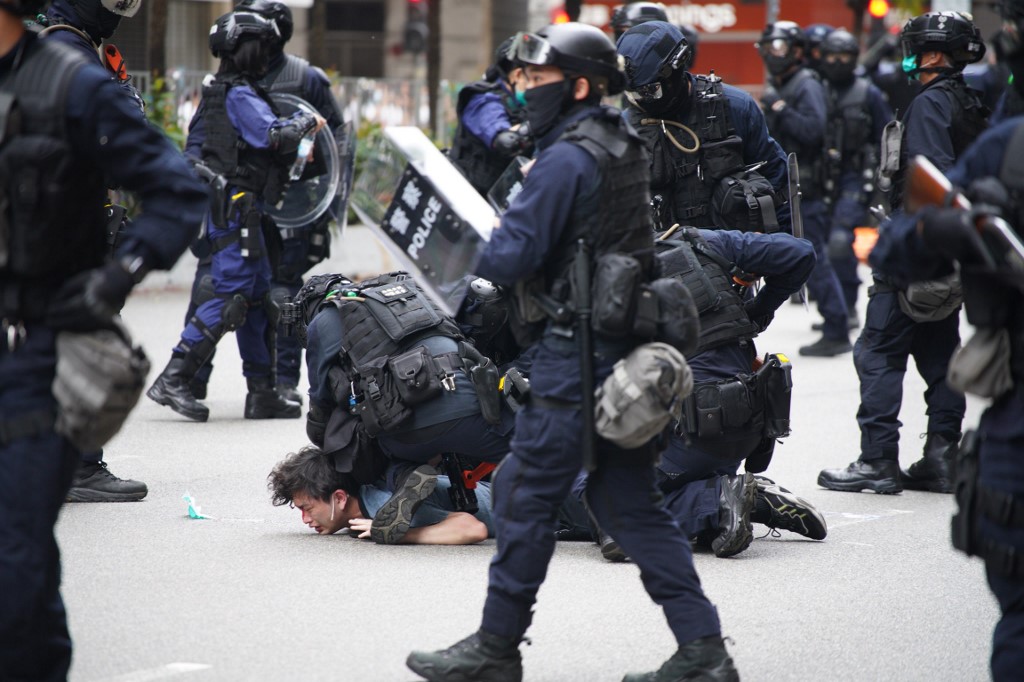 Blaming China for the Covid-19 pandemic is false. But the U.S. will continue to do so as a part of its larger anti-China strategy.

As the U.S. is busy countering the epidemic at home China has already defeated it within its borders. It now uses the moment to remove an issue the U.S. has long used to harass it. Hong Kong will finally be liberated from its U.S. supported racists disguised as liberals.

In late 1984 Britain and China signed a formal agreement which approved the 1997 release of Britain's colony Hong Kong to China. Britain had to agree to the pact because it had lost the capability to defend the colony. The Sino British Joint Declaration stipulated that China would create a formal law that would allow Hong Kong to largely govern itself.

Chapter II of the Basic Law regulates the relationship between the Central Authorities and the Hong Kong Special Administrative Region. Article 23 of the Basic Law stipulated that Hong Kong will have to implement certain measures for internal security:

Hong Kong has failed to create any of the laws demanded by Article 23. Each time its government tried to even partially implement such laws, in 2003, 2014 and 2019, protests and large scale riots in the streets of Hong Kong prevented it.

China was always concerned about the foreign directed unrest in Hong Kong but it did not press the issue while it was still depending on Hong Kong for access to money and markets.

In the year 2000 Hong Kong's GDP stood at $171 billion while China's was just 7 times larger at $1.200 billion. Last year Hong Kong's GDP had nearly doubled to $365 billion. But China's GDP had grown more than tenfold to $14,200 billion, nearly 40 times larger than Hong Kong's. Expressed in purchase power parity the divergence is even bigger. As an economic outlet for China Hong Kong has lost its importance.

Another factor that held China back from deeper meddling in Hong Kong was its concern about negative consequences from the U.S. and Britain. But under the Trump administration the U.S. has introduced more and more measures to shackle China's development. The Hong Kong Human Rights and Democracy Act passed last year by the U.S. Congress demands that the U.S. government reports on Hong Kong and punishes those who it deems to be human right violators. The sanctions against Chinese companies and especially Huawei, recently expanded to a total economic blockade of 5G chip deliveries to that company, demonstrate that the U.S. will do anything it can to hinder China's economic success.

The U.S. Marine Corps is being reconfigured into specialized units designed to blockade China's access to the sea:

Thus, small Marine forces would deploy around the islands of the first island chain and the South China Sea, each element having the ability to contest the surrounding air and naval space using anti-air and antiship missiles. Collectively, these forces would attrite Chinese forces, inhibit them from moving outward, and ultimately, as part of a joint campaign, squeeze them back to the Chinese homeland. 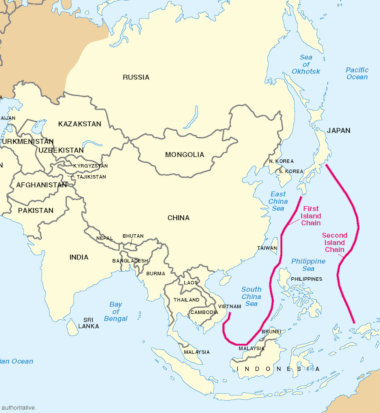 Last year's violent riots in Hong Kong, cheered on by the borg in Washington DC, have demonstrated that the development in Hong Kong is on a bad trajectory that may endanger China.

There is no longer a reason for China to hold back on countering the nonsense. Hong Kong's economy is no longer relevant. U.S. sanctions are coming independent of what China does or does not do in Hong Kong. The U.S. military designs are now an obvious threat.

As the laws that Hong Kong was supposed to implement are not forthcoming, China will now create and implement them itself:

The central government is to table a resolution on Friday to enable the apex of its top legislative body, the Standing Committee of the National People’s Congress (NPC), to craft and pass a new national security law tailor-made for Hong Kong, it announced late on Thursday.

Sources earlier told the Post the new law would proscribe secessionist and subversive activity as well as foreign interference and terrorism in the city – all developments that had been troubling Beijing for some time, but most pressingly over the past year of increasingly violent anti-government protests.
...
According to a mainland source familiar with Hong Kong affairs, Beijing had come to the conclusion that it was impossible for the city’s Legislative Council to pass a national security law to enact Article 23 of the city’s Basic Law given the political climate. This was why it was turning to the NPC to take on the responsibility.

On May 28 the NPC will vote on a resolution asking its Standing Committee to write the relevant law for Hong Kong. It is likely to be enacted by promulgation at the end of June. The law will become part of Annex III of the Basic Law which lists "National Laws to be Applied in the Hong Kong Special Administrative Region".

Under the new law the U.S. will have to stop its financing of student organization, anti-government unions and media in Hong Kong. The opposition parties will no longer be allowed to have relations with U.S. influence operations.

Hong Kong has flourished as a bastion of liberty. The United States strongly urges Beijing to reconsider its disastrous proposal, abide by its international obligations, and respect Hong Kong’s high degree of autonomy, democratic institutions, and civil liberties, which are key to preserving its special status under U.S. law. Any decision impinging on Hong Kong’s autonomy and freedoms as guaranteed under the Sino-British Joint Declaration and the Basic Law would inevitably impact our assessment of One Country, Two Systems and the status of the territory.

We stand with the people of Hong Kong.

It is not (yet?) The Coming War On China (video) but some hapless huffing and puffing that is strong on rhetoric but has little effect. No U.S. action can prevent China's government from securing its realm. Hong Kong is a Chinese city where China's laws, not U.S. dollars, are supreme.

The U.S. seems to believe it can win a cold war with China. But that understanding is wrong.

Since the US-China tech war began in April 2018 with Washington’s ban on chip exports to China’s ZTE Corporation, “de-Americanization of supply chains” has been the buzzword in the semiconductor industry.

Taiwan, Vietnam, Thailand and Indonesia purchased about 50% more Chinese products in April 2020 than they did in the year-earlier month. Japan and Korea showed 20% gains. Exports to the US rose year-on-year, but from a very low 2019 base.

When the U.S. prohibits companies, which use U.S. software or machines to design and make chips, from selling them to China then those companies will seek to buy such software and machines elsewhere. When the U.S. tries to hinder China's access to computer chips, China will build its own chip industry. Ten years from now it will be the U.S. which will have lost access to the then most modern ones as all of those will come from China. Already today it is China that dominates global trade.

The chaotic way in which the U.S. handles its Covid crisis is widely observed abroad. Those who see clearly recognized that it is now China, not the U.S., that is the responsible superpower. The U.S. is overwhelmed and will continue to be so for a long time:

This is why I don’t see the talk about a possible “Cold War 2.0” as meaningful or relevant. If there were to be any sort of “cold war” between the United States and China, then U.S. policymakers would still be able credibly to start planning how to manage this complex relationship with China. But in reality, the options for “managing” the core of this relationship are pitifully few, since the central task of whatever U.S. leadership emerges from this Covid nightmare will be to manage the precipitous collapse of the globe-circling empire the United States has sat atop of since 1945.
...
So here in Washington in Spring of 2020, I say, Let ’em huff and puff with their new flatulations of childish Sinophobia. Let them threaten this or that version of a new “Cold War”. Let them compete in elections– if these are to be held– on versions of “Who can be tougher on China.” But the cold reality shows that, as Banquo said, “It is a tale, told by an idiot, full of sound and fury, signifying nothing.”

In his 2003 book After the Empire Emmanuel Todd described why the U.S. was moving towards the loss of its superpower status:

Todd calmly and straightforwardly takes stock of many negative trends, including America's weakened commitment to the socio-economic integration of African Americans, a bulimic economy that increasingly relies on smoke and mirrors and the goodwill of foreign investors, and a foreign policy that squanders the country's reserves of "soft power" while its militaristic arsonist-fireman behavior is met with increasing resistance.

The Covid-19 crisis has laid all this bare for everyone to see.

Will the U.S., as Todd predicted, now have to give up its superpower status? Or will it start a big war against China to divert the attention elsewhere and to prove its presumed superiority?

Dontell Jackson (We Thought They Were White)
1,933

Dontell Jackson (We Thought They Were White)
1,933