The Catholic Approach to the Jewish Problem

The Catholic Approach to the Jewish Problem 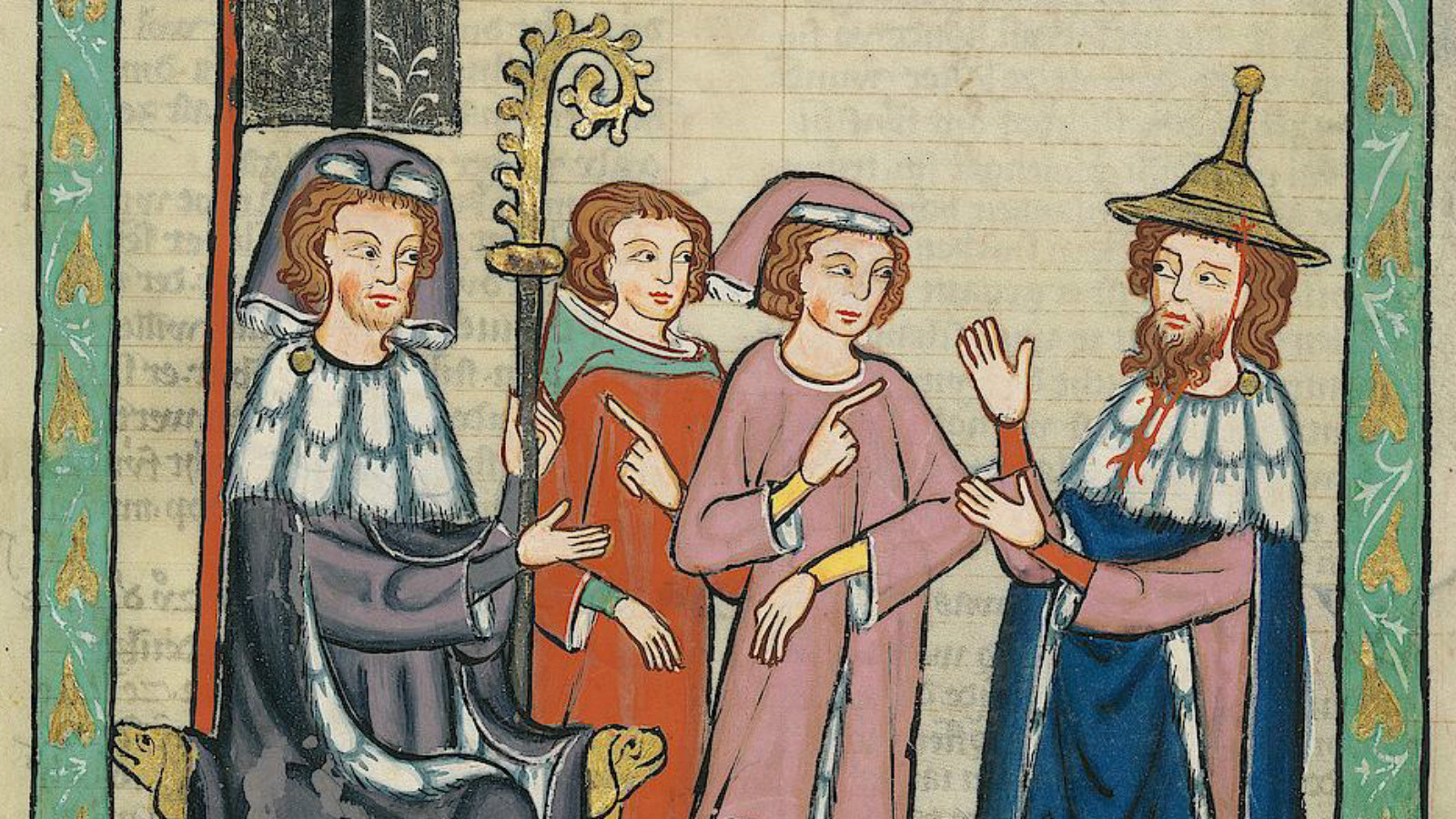 In 15th Century Spain, the Jews had become an unavoidable problem. A situation we are all familiar with had become general, with Jews controlling commercial life through banks, lending money at exorbitant interest, and consisting a “state within a state” that refused to bow to the customs, civil and religious, of their hosts. During the whole of the Reconquista, Jews had played off both Spaniard and Moor, helping one or the other side and managing to maintain their positions in either side’s territory. But with the close of that epoch and the conquest of Grenada, the monarchs Ferdinand and Isabella turned their undivided attention to the Jews, who were forced to either convert or emigrate. Those who stayed behind and converted usually continued to practice Judaism in secret, and became known as Marranos. This term came to have a wider application eventually, and refer to Sephardi emigres as far away as Netherlands and Norway, whatever their level of pretense to practicing Christianity might be.

Astonishingly, the Jews in Spain continued to play a large role in the the affairs of Spain thereafter. Torquemada, the Dominican in charge of the first Inquisition, charged with the forcible conversion of crypto-Jews, was himself of Jewish ancestry, a situation that few have wondered at, or considered what that might mean for the reality of his anti-Jewish campaign. Indeed, from the works of Cecil Roth and Caro Baroja on the history of the Jews in Spain, there is no point in subsequent centuries in which they are without influence, or that the country is free from their machinations, even after the hard measures of forced conversion. Why might this be?

In the times of Alfonso the Wise in the 13th century, a code of law was promulgated that denounced the Jews, and put the usual “harsh restrictions” upon them, specifically mentioning the “Blood Libel”, their unfortunate tendency to ritually murder gentile children. And yet, these same Jews somehow came to have such terrific power that by the 15th century at the time of their “expulsion”, it has been shown that 9/10th of commerce in the city of Zaragoza alone was in the hands of Jews, lending at 6-10% interest [Manuel Serrano y Sanz “Estudios Historicos y Origenes de la Domination Espanola en America”, 1918], which in the innocent days before the total Jewish takeover of all financial institutions was considered exorbitant usury. How could they have come into such a cozy situation, being persecuted so, and for so long?

The answer to these questions lies in the Catholic approach to the Jewish Problem. It consisted in “harsh repression” that forced upon those innocents the terrible burden of having to make their living by lending money to the goyim, and naturally to the Church and Crown as well, and having a monopoly on such affairs at most times, as Catholic anti-lending laws were actually applied to gentiles (The great “Lombard Banks” were actually glorified pawn shops, little resembling modern banks). The Jews were also suffered the calamitous misfortune of having to live in ghettos, fortified sections of the city where they were protected from the outrage of cheated citizens by armed guards at public expense.

At this point it ought to be pretty clear that Traditional Catholic “anti-Jewish measures” might leave something to be desired. In fact, that they were a “problem” for 1000 years of European history, getting “kicked out” of this or that city hundreds of times, is more of an indictment of the patience of Europeans than the perfectly predictable criminality of Jews. This starts to look very scandalous when we consider that campaigns of absolute destruction were waged against white pagans in Germany, in the Baltic, and elsewhere which ended in the complete eradication of those systems of belief and social organization. Ditto for the campaigns against the Cathars of France, who were extirpated from the face of the Earth completely by the Church and the King of France. Thus, we do not read of an Anti-Cathar Law in the 12th century, and then go on to read about a “Cathar Problem” for the next several hundred years, and then look up from our books to find our nation lousy with those pesky Cathars with their boot on our necks. The medieval Church seemed to have no problem at all eliminating them.

We could also consider the crusades, which involved an almost unimaginable expense over hundreds of years, consuming the flower of European chivalry in an effort to take and retain a sliver of land in the Middle East. Perhaps you might wonder that such campaigns against the infidel might precede any attempt to remove infidels from the cities and countries in which white gentiles were actually living in Western Europe, and you’d be wondering the same thing Europeans were wondering way back then. Crusades when proclaimed were usually accompanied by the desires of the peasantry and petty nobility to have an anti-Jewish pogrom, which desires were invariably quashed by the Church. In the Rhineland, the local Archbishop buried pogromed Jews in his own palace grounds, and of course the Church strenuously objected to these measures. Massacring white unbelievers, raping their women, despoiling their towns? Papal sanction, and a “get to heaven free” pass thrown in. Annoy the Archbishop’s pet Jews? You are excommunicated, enjoy an eternity in Hell, sinner. “Damned are those who dare resist, and touch the Lord’s anointed”.

This history of persecution of the Jews at a time when the Catholic Church had complete power in Europe brings us back around to Spain. You understand, when the above oppression didn’t quite do the trick, and Jews somehow managed to completely control a territory and begin to bother even Church and King with their antics, an even harsher retaliation than cushy jobs and gated communities had to be employed. Yes, the Jews would have to be sprinkled with water by a priest, which would, it was thought, solve the problem forever and ever.

Of course it didn’t happen. They continued to run riot while pretending to be Christian, and often even when they didn’t bother to pretend. The authors cited above provide a fine history of the subsequent centuries, albeit from a philosemitic perspective.

We will close our investigation into the Catholic Response to the Jewish Question with a brief look at a single incident in Amsterdam, a Protestant city to which many Marranos had fled. The curious fact ought to be noted of course, that while the Protestant-Catholic Wars of the Reformation killed millions upon millions of white Europeans, (30% of Germans died in the 30 Years’ War) the Jews marvelously made it out ok, though they presumably “reviled Christ” quite a bit more than either Christian denomination did.

Manasseh ben Israel, alias Manoel Dias Soeiro, received a missive from a coreligionist who had been traveling in the Spanish colonies of America around 1644. This man, Aharon Levi, alias Antonio de Montezinos, with callous disregard for the old “harsh measures” of the Most Catholic Monarch of All the Spains, had spent quite a bit of time lolling around Panama, and claimed to have discovered certain Indian tribes practicing Judaism while there. This claim, when published by ben Israel in his “Hope of Israel” caused quite a stir. He had helpfully explained the significance of the discovery for his gentile readership— a book published in Latin, Spanish, and English can hardly be expected to be directed to Hebrews— that this boded extremely well for the fulfillment of prophecy and Christ’s return in Glory and Majesty, since this is slated to occur when the Jews are brought from all the ends of the Earth to Israel etc etc. And since they were already happily present at the ends of the Earth, ie, Panama, the only place lacking their blessings was England, from which they had been expelled in the Middle Ages. Oliver Cromwell, weighing both financial considerations and the prospect of bringing about the New Jerusalem, welcomed the Jews into England in 1655.

Jews are Mass Released from Prison – I Doubt They Will Ever Have to Go Back
The Odd Similarities Between Parasite Beetles Which Invade Beehives, and Jews
UK Political Analyst: Jews 'Disproportionately Influential In Business, Professions, And Sciences'